Smartphones powered by Linux are, for a fact, dominating the smartphone market. A few of you may be scratching your heads at this point. Others are filled with “The Sound of Music” – “The Hills are Alive” kind of Linux pride!

Read on, and I’ll provide some pudding, filled with proof that 85% of all Smartphones are powered by Linux.

Very often, when I meet people outside of work, especially socially, they’ll ask: “what type of work do you do?”. When I respond with Linux Systems Analyst, many respond with “I don’t really like Linux because it can’t open or edit Microsoft Word files.”* or sometimes say: “You mean that OS that has all text and no GUI?”** or even “Linux, what’s that?”

As most of you reading this know, Google’s Android and Chrome OS are operating distributions both originally based on the Linux kernel.

Android smartphones are powered by Linux. 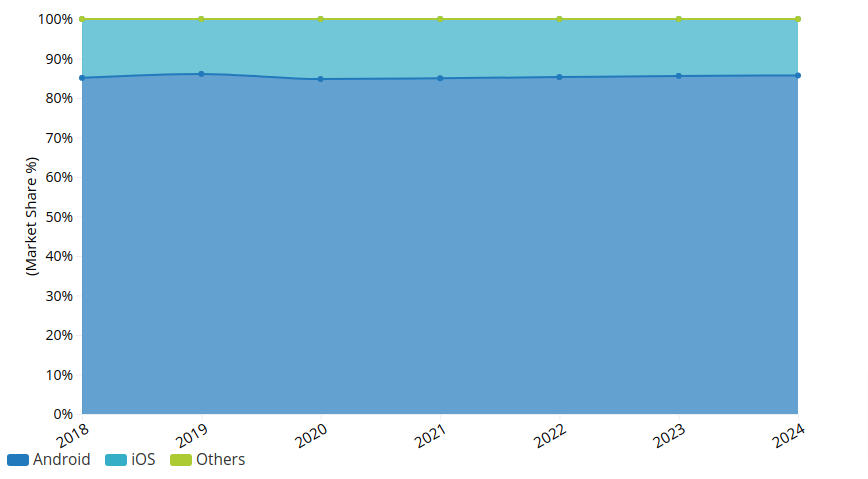 Android is an operating system based on the Linux kernel. Or, as Google’s developers put it, “Android is built on the open Linux Kernel” [link includes video]. As of Android 11, Android sits on a Long-Term-Support (LTS) Linux kernel. Namely, based on Linux kernel versions 4.19, and 5.4.

To be more specific: “since 2019, the Linux mainline is now merged into the android-mainline whenever Linus Torvalds posts a release or release candidate. Before 2019, Android common kernels were constructed by cloning the recently declared LTS kernel and adding the Android-specific patches. This new model avoids the significant effort to forward port and test Android patches by accomplishing the same result incrementally.” – Source.

Now that we’ve confirmed that Android smartphones are powered by Linux, let’s look at the dominating popularity of Linux-powered smartphones, namely Android. We will also look at some other up-and-coming Linux smartphones.

Linux kernel runs on 85% of all Smartphones.

A recent study done by IDC reveals that Android has fortified itself in the smartphone market. The study, released in November 2020, said that 261.1 million smartphones shipped during that quarter, and 85 percent were Androids.

According to Gartner and Statista, Android now boasts a global market share of 86 percent. Look at the graph below for more details on the smartphone market share by mainly the top two smartphone OS distributors, Andoird and Apple (iOS). 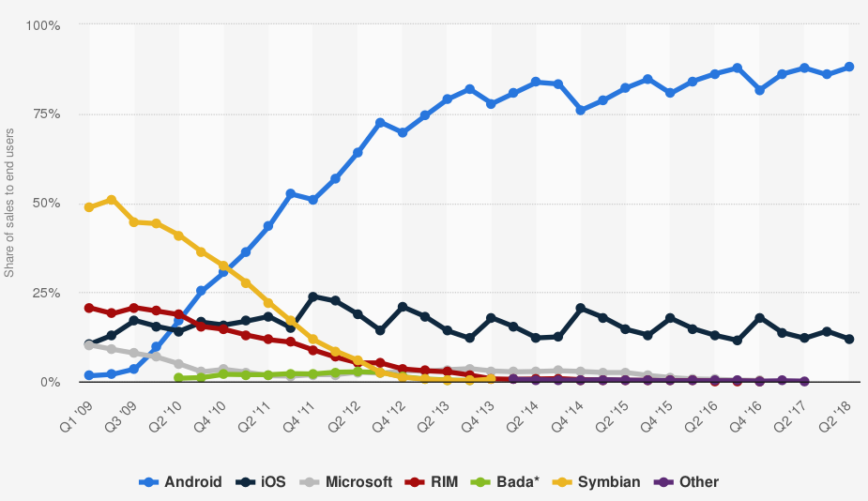 If you would like additional Linux smartphone options, have a look at the following Linux smartphones. Read on for details on the Ubuntu Touch, Librem 5, Pinephone, and the F(x)tec Pro1, to name a few.

Ubuntu Touch for smartphones and tablets.

Ubuntu Touch (previously Ubuntu Phone) is a mobile version of the Ubuntu operating system initially developed by Canonical Ltd. but is now being developed by the UBports community. It is designed primarily for touchscreen mobile devices such as smartphones and tablet computers. Ubuntu Touch is 100% community-driven and independent.

Also, check out this list, which shows currently supported smartphones in the Ubuntu Linux Touch ecosystem. There’s growing support for the Fairphone 3. Mature devices have easy access to installation through the UBports Installer. Devices in an early state generally need to follow a manual installation procedure. – ubuntu-touch.io 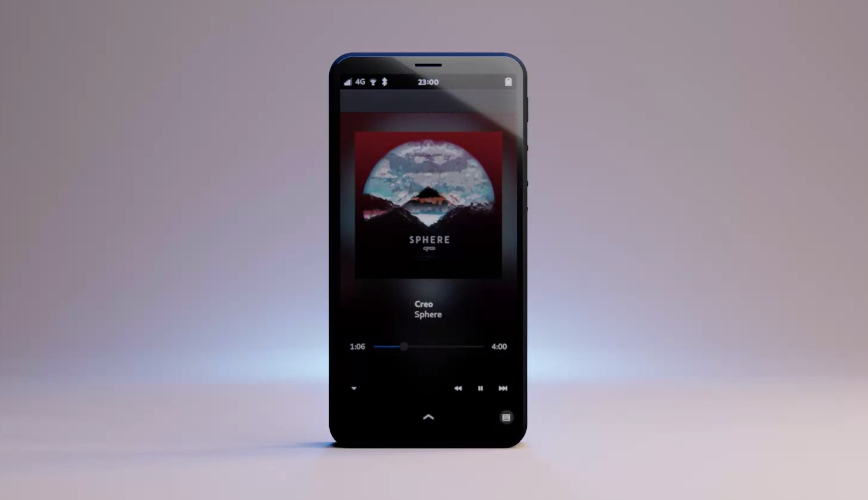 The Librem 5 smartphone focuses on security by design and privacy protection by default and is based on Debian Linux. Running Free Open-Source software and a GNU+Linux Operating System. 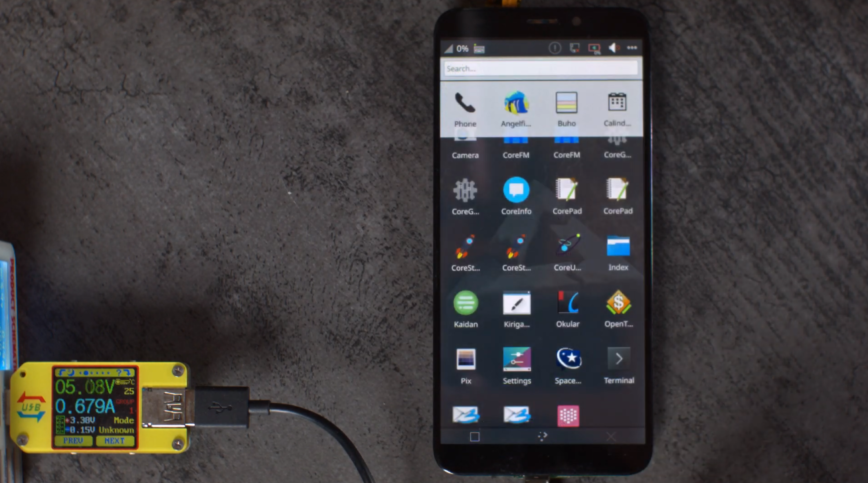 The PinePhone is a smartphone developed by computer manufacturer Pine64 – the makers of the Pinebook Pro – intended to allow users to have complete control over their smartphone. Measures to ensure this are running mainline Linux-based mobile operating systems, assembling the phone with screws to simplify repairs and upgrades, and including six kill switches/security switches for its hardware, accessible by removing the back cover of the phone. – pine64.org/pinephone/ 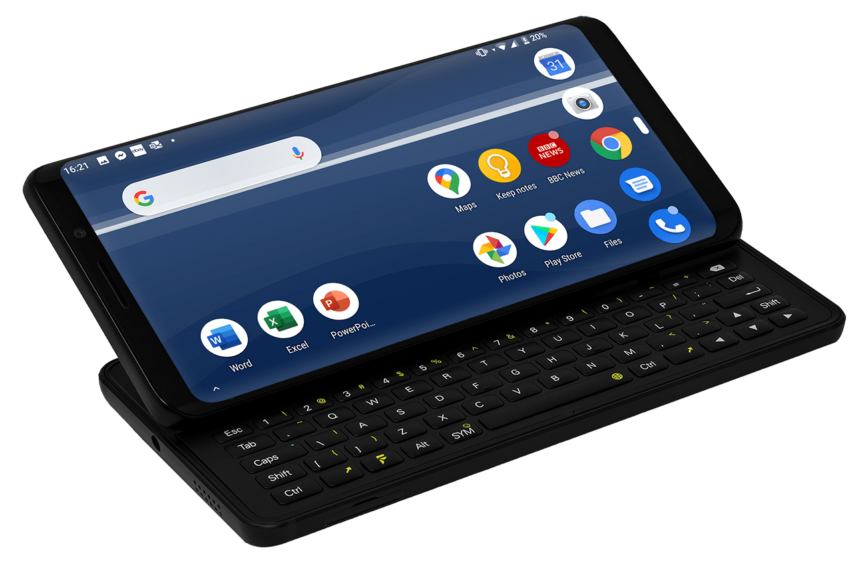 The Pro1 is a touchscreen smartphone with a slide-out horizontal physical keyboard. This Linux smartphone is designed and manufactured by London-based smartphone brand F(x)tec. The Pro1 is an evolution from the early Moto Mod Livermorium keyboard. Currently, the Pro1 community has helped develop a clean Linux operating system, with Sailfish soon to come. – fxtec.com

Plasma Mobile – from the creators of KDE Plasma Linux desktop.

Plasma Mobile is a Plasma variant for smartphones. It is currently available for the Nexus 5 and Nexus 5X, supported devices on postmarketOS, and the PinePhone. Plasma Mobile runs on Wayland, and it is compatible with Ubuntu Touch applications. PinePhone – KDE Community Edition was made available as pre-orders on 1 December 2020. – plasma-mobile.org.

Linux kernel on your Android

You’ll get more access to Linux on a rooted device, but for the fun of it, let’s use the default Android OS and look at what version of the Linux Kernel your Android has installed. For most Android smartphones, you can view the Linux Kernel version on your Android smartphone by going to the “settings” > “about phone” section (you may have to tap on the Android version).

If you have a rooted Android, you can usually install “Termux,” then launch it and type the following command:

Which will output something like this from a OnePlus device:

Of course, you can do a bunch of cool stuff on a rooted Android with terminal access. For example, using top or htop you can use the command line to install packages, kill apps, launch services, and so on.

The Android army of smartphones continues to invade the smartphone market. Mainly because it’s open-source, allowing power-users and developers alike the freedom to explore, develop and break new ground like never before.

Lastly, I hope that more users will become aware of Linux and, as such, embrace its power and the community that comes with it. More power to users!

* Linux can indeed open and edit Word files, Excel spreadsheets, etc., on desktops, tablets, and smartphones.
** There are more GUI options available for Linux (example. Gnome, KDE, Xfce, etc., etc.)  than any other operating system out there.