During security audits, sysadmins will often have to set up new servers or harden existing server passwords. As a result, secure passwords have to be chosen for SFTP, admin panels, etc.

Many practices make a server secure, but often neglected is using secure passwords.

Notice that I didn’t include SSH or MySQL root passwords above. If you are serious about security, these should not be accessible via a remote password login.

For SSH, you should already use authentication keys and set PasswordAuthentication no in your SSHD config file.

For MySQL, you should use  bind-address = 127.0.0.1 and iptables to block port 3306 or restrict access to specific IP(s). If MySQL is on the same server, connect via sockets. 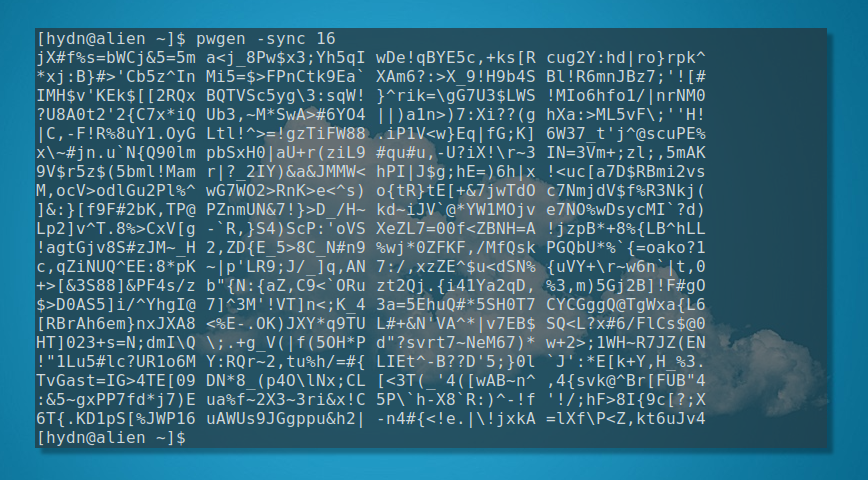 For selecting secure passwords, here’s what is recommended:

Here’s my go-to command-line method for secure password generation. The command I use is:

Even more secure and easy to remember using the word ‘sync’:

Read more about pwgen. On most Linux distros, you can install pwgen using the systems package manager. For example:

Once installed, here’s an explanation of the command I’m using above. You can fine-tune it to meet your needs.

-y, –symbols: Include at least one special character in the password.

-n, –numerals: Include at least one number in the password.

-c, –capitalize: Include at least one capital letter in the password.

16: the length of generated passwords.

Need fewer generated passwords? Use pwgen -sync 16 1 where 1 = the number of password results.

With pass, each password lives inside a gpg encrypted file whose filename is the title of the website or resource that requires the password. These encrypted files may be organized into meaningful folder hierarchies, copied from computer to computer, and, in general, manipulated using standard command-line file management utilities. Thus, pass is also a command-line password manager.

This is an updated article from 2013. Here’s the previous method from the original article…

Use the urandom command to generate secure passwords

Making this into a simple easy to remember command

Save and restart the server, or even better, reload bash using:

Now in the future, type the following to generate a secure password:

It would take trillions of years to crack your password using these methods. This is why a strong password is essential.

Other Linux commands use OpenSSL, dd, and date to generate passwords, but pwgen is my preferred method. Feel free to add your methods below.

Also, remember you should have security to avoid brute force password cracking. For example, after five failed attempts, the IP should be blocked and reported (for example, abuseipdb.com).

More on how I set up that in a later article.