Last week, I published part 1 of this five-part series entitled: Linux Commands frequently used by Linux Sysadmins. That first article scratched the surface of what I believe are 50 to 100 commands used often by Linux Sysadmins and power users. Also, see Part 3, Part 4, and Part 5.

Let’s jump into another set of commands and command-line tools often used for analysis, troubleshooting, and Linux system administration. Listed below are some of the commands I’ve used over the past week. In this and future series, I will group related commands together as much as possible and add a table of contents to interlink all five parts. 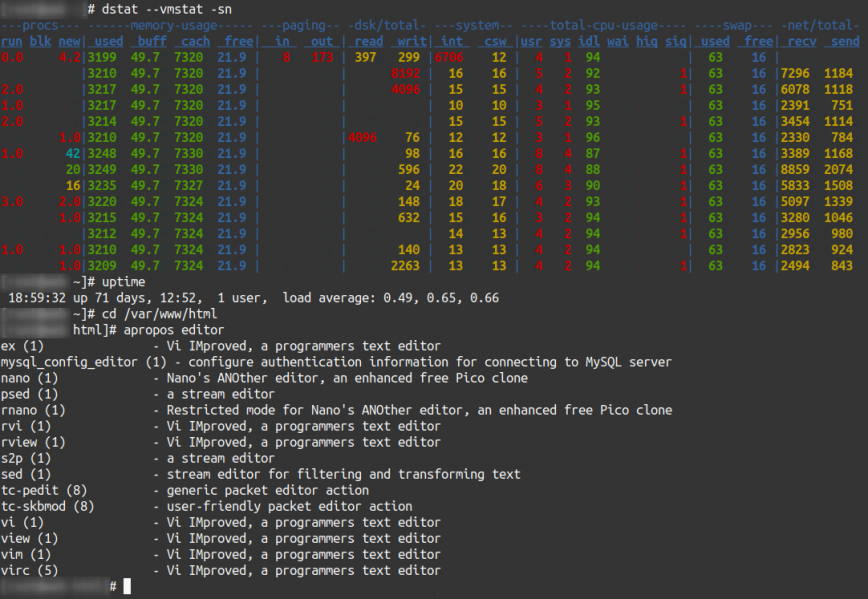 Here are some related articles I’ve written in the past covering command-line system monitoring tools:

Other than my Homelab, most of my Sysadmin related work is performed remotely. With clients’ server locations in the Americas, Europe, Asia, and Australia. Access command line on a remote server; you can use the ssh command.

-i identity_file, selects a file from which the identity (private key) for public-key authentication is read.
-p port, is used to select which port to connect to on the remote host.

SSH can also be run securely on a graphical desktop using terminal emulators such as Terminator.

In Part 3, we will take a look at using rsync.

The sudo (Super User DO) command in Linux is regularly used as a prefix to commands which only the superuser (root) has permission to run. If you are not logged in with the root user, you can use the sudo  command to preface a command in order to run that command with root privileges. For example:

Once you run a sudo command, as a security precaution, you will be prompted to enter the password of the current non-root user session. (not the root password)

The cd command allows you to change directories. To navigate into the root directory, use:

Navigate to your home directory use:

Navigate up one directory level:

Navigate to the previous directory (or back):

To navigate to a multi-level directory use:

The cp command will create a copy of a file for you. For example:

This command will create a copy of “file1” named “file1_backup”, and “file1” will remain unmodified.

To copy a directory and it’s contents use the command with -r recursively:

The mv command is used to move a file from its location to a different location or rename it. For example:

will move “file1” to your Desktop directory, but it will not rename it.

To move AND rename, you can specify a new file. For example:

You can substitute ~ in place of /home/user/ which is faster for home directory related commands. For example:

When using the sudo command or logged in as root, then ~ will be the home directory of root.

Use the rm command to remove/delete a file in a directory. For example:

Use the rmdir command to delete an empty directory.

Use rm -r to delete a directory and all of its contents recursively:

You can also create an empty file with touch command or cat:

Or create a new directory you can use the mkdir command:

In Part 5, we will look at creating and editing files with vi and nano.

The man command displays a manual for any terminal commands we need help or info. All man pages include but are not limited to the following standard sections: Name, Synopsis, Description, Examples, and See Also.

The apropos command searches the man page names and descriptions. It can be used to find what commands to use for a certain job.

For example, search for available commands related to the firewall: