Let’s now look into another set of commands and command-line tools frequently used for filesystem management, security, permissions, networking, and other administrative tasks performed on Linux systems. After the final part of this series is posted, I will group related commands, and interlink all five parts.

Whether you’re a Linux desktop power user or an experienced Linux sysadmin,
you’ll find yourself using these commands frequently. (Part 4 of 5)

The commands listed below are useful for downloading remote files, using WHOIS from the command line, adding users, converting, and copying files, etc,. They are also useful when attempting to fix an unbootable Linux system. Likewise, you can also easily brick your system if you are not familiar with using some of these commands. As such, I strongly recommend first testing some of these commands in your sandbox and home lab environments. See my home lab setup guide.

wget is a command-line tool used for downloading files via HTTP, HTTPS, FTP, and FTPS. Because wget is command-line only, this means it can also be called up from scripts, cron jobs, and other non-GUI methods. The syntax for wget is as follows:

So, for example, if you would like to download the official wget manual (a PDF file), you can use the following command:

The most common wget alternative is curl. Curl supports more protocols including FTPS, Gopher, HTTP, HTTPS, SCP, SFTP, TFTP, Telnet, DICT, LDAP, LDAPS, IMAP, POP3, SMTP, and URI. Curl is an extremely flexible utility; you can, for example, use it to test a website’s TTFB (Time to First Byte) and a host of other uses.

Here’s an example of a curl command: 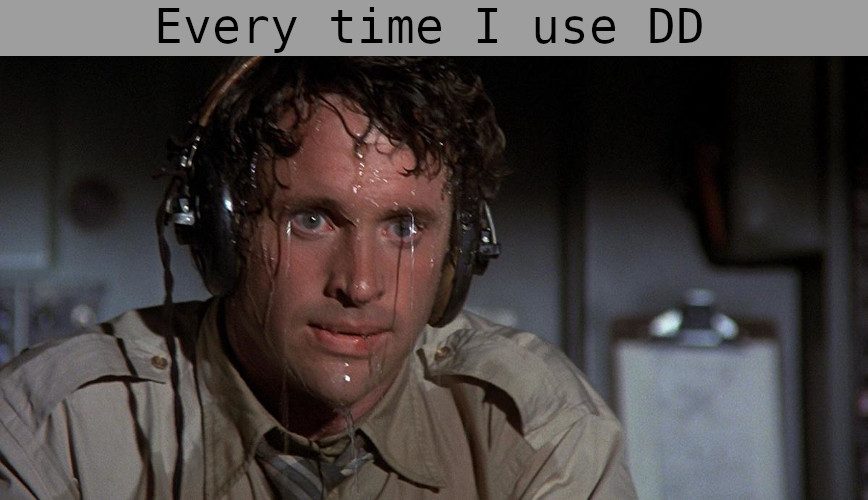 Originally dd stood for “Copy and Convert”, but it was renamed because the C compiler already used cc. (Source: man dd from Unix-V7 on PDP-11) That said, many have wisely named dd as the “data destroyer” or “disk destroyer”.

dd is a very versatile utility available for Linux. The dd command-line utility’s primary purpose is to convert and copy files. One of the most popular uses of dd is to make USB boot drives from a .img or .iso file. For example, when first setting up the Raspberry Pi, you’ll need to copy the operating system to a USB stick (aka. thumb drive) for which you can use the dd command.

For example, here’s the command to write an .img or .iso to a USB stick or other bootable storage device:

Change /dev/sdX to the correct device name.
Warning: You will lose your data if you provide the wrong device name!

You can also reverse that command to backup the USB to your Linux system. However, if the USB is 32G and the storage used is only 8GB, then you won’t want to backup the entire 32GB device. You can use the following command and replace “XXXX” with the block count + 1 of the space used on the USB. You can find this using the fisk -l command, as discussed next.

Also read: Your Web Host Doesn’t Want You To Read This: Benchmark Your VPS. 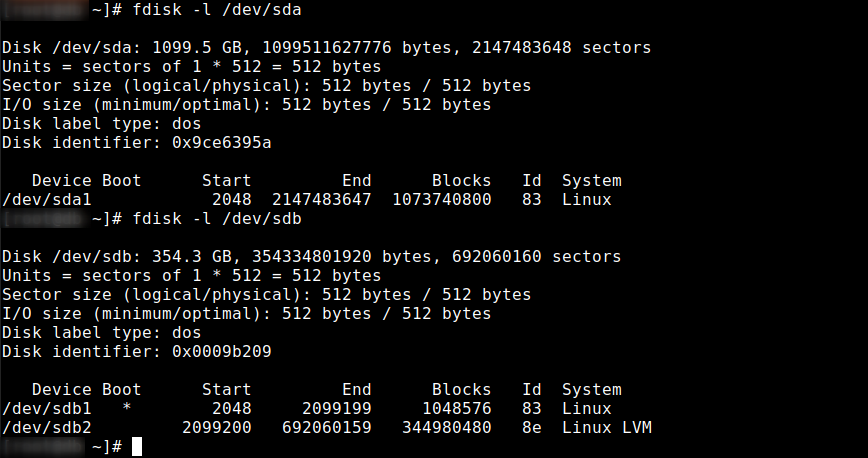 To display the partition for a specific device, include the device name. (see the example in the above screenshot):

Device: Shows the device name, followed by the partition number.
Boot: The Boot column shows that the first partition, /dev/sda1, has an asterisk (*), indicating that this partition contains the files required by the boot loader to boot the system.
Start and End: Shows the start and end of used blocks for each partition.
Blocks: shows the number of blocks allocated to the partition.
Id and System: Shows the partition type.

To enter the fdisk command-driven utility, use the following command (replace sdX accordingly): 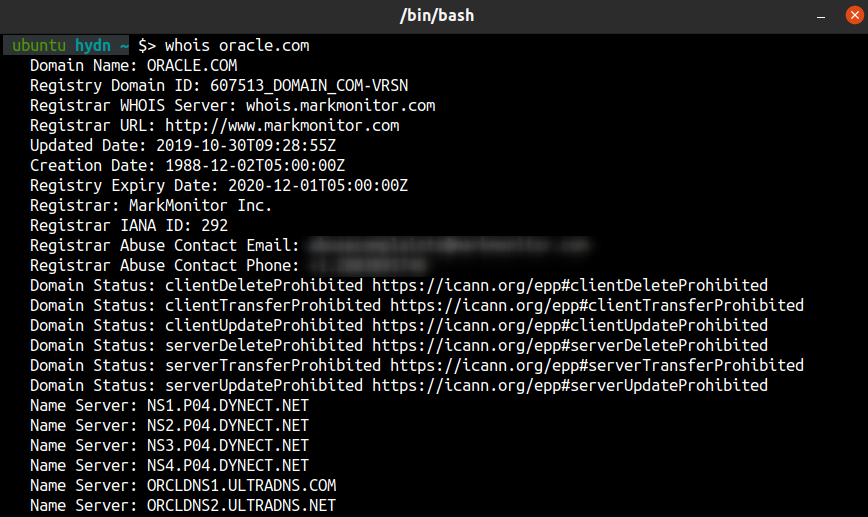 The whois command in Linux can be used to find out information about a domain, such as the domain owner, contact info, nameservers in use, etc. For example, to find out domain information for oracle.com, you can use the following command:

nc (netcat) is a convenient command-line networking utility. nc can be used for port scanning, port redirection, port listening, to open remote connections, to name just a few of its tricks.

Notice there’s a ton of connection refused for all the thousands of closed ports. If you would like to show only open ports you can use:

There are alternatives to netcat which you can read in my list of 60 Linux Networking commands and scripts.

chmod (change mode) is the command and system call used to change the access permissions of Linux files and directories and to change special mode flags. The chmod request is filtered by umask. The command syntax goes like this:

To change the access permissions for a file, you can use:

To change the access permissions for a directory, you can use:

In Linux systems, every file is associated with group ownership and an owner. The chown (change owner) command is used to change ownership of file system files and directories. A non-root user cannot change ownership of a file, even if the user owns it. Only the root account can perform a change of ownership, while only a member of a group can change a file’s group ID to that group.

If an unprivileged user wishes to change the group membership of a file that they own, they can use the chgrp to do so.

The root, or “/”, is the mount point of the entire Linux file system, and any file or directory on the machine can be referenced back to this mount point. The chroot (change root) command is used to change the root mount point to a different location. For example:

One of the most common reasons to make this change is to create a sandbox for either an application or a user. Once a new root is set using chroot, any references a user or application makes to “/” will then resolve to the new chroot directory. This is also a good way to restrict access to the system’s root and filesystem. A chrooted shell is also known as a jailed shell.

Chroot is also used when attempting live CD/USB recovery on a broken system which won’t boot.

Adding and removing users is an essential Linux administration task. A new Linux server is often by default set up for access using only the root account. However, for performing many system administration tasks, it is better to add an unprivileged user.

For example, to add a new user named james, use this command:

To set a password for the new user, use:

userdel – used to delete a user account and all related files.

usermod – used to modify or change any attributes of an existing user account.

sudo – For tasks requiring root privilege, you can use the sudo command. Basically, sudo allows you to run a command as another user, including root. After you add a new user, you may want to assign sudo privileges and delete users. – Also, see sudo.ws, and Arch Linux sudo wiki.

— cheat on your command line (Github): 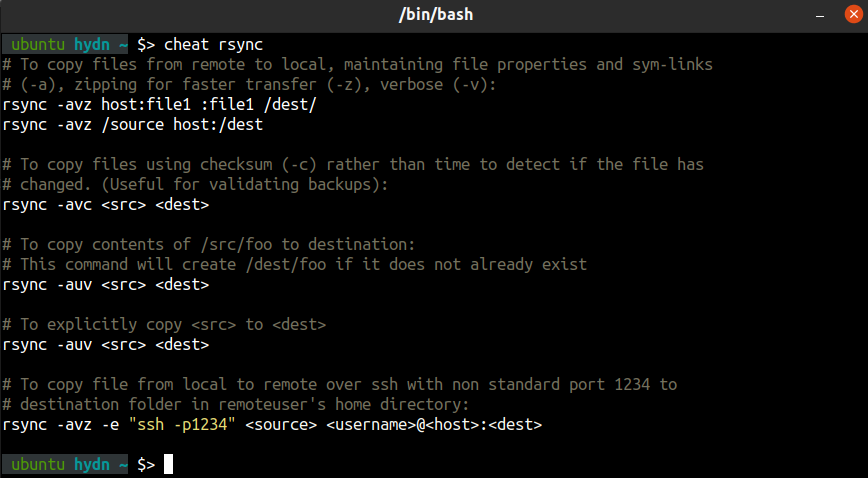 cheat allows you to create and view interactive cheatsheets on the command-line. 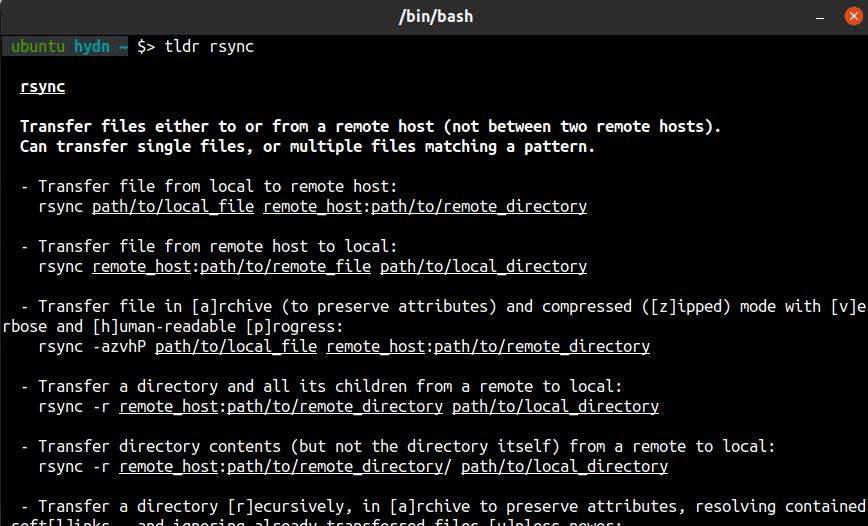 That’s it for now! I hope you enjoyed part 4. Check back for part 5.