Sometimes it can be a bit of a challenge knowing if and when you should upgrade the RAM (random access memory) on your Linux server. Even more so, when deciding how much memory you should add, or if you have adequate memory, how do you make the best use of it? This article will walk you through performing command line checks on Linux servers using a few real-world examples. Also included is brief advice to help clarify your path forward if you currently face Linux server memory management choices.

Look at the first screenshot below; based on the output of ‘free -m’ on a 1GB VPS and considering the amount of swap space in use (details further below), a RAM upgrade was necessary. Required was a minimum of 3GB, so we upgraded to 6GB. This ensures that there’s adequate memory available for buffers/cache. After the memory upgrade (around 9:30 am), here’s how load averages responded:

Here are three additional before and after memory graphs of used vs free memory: 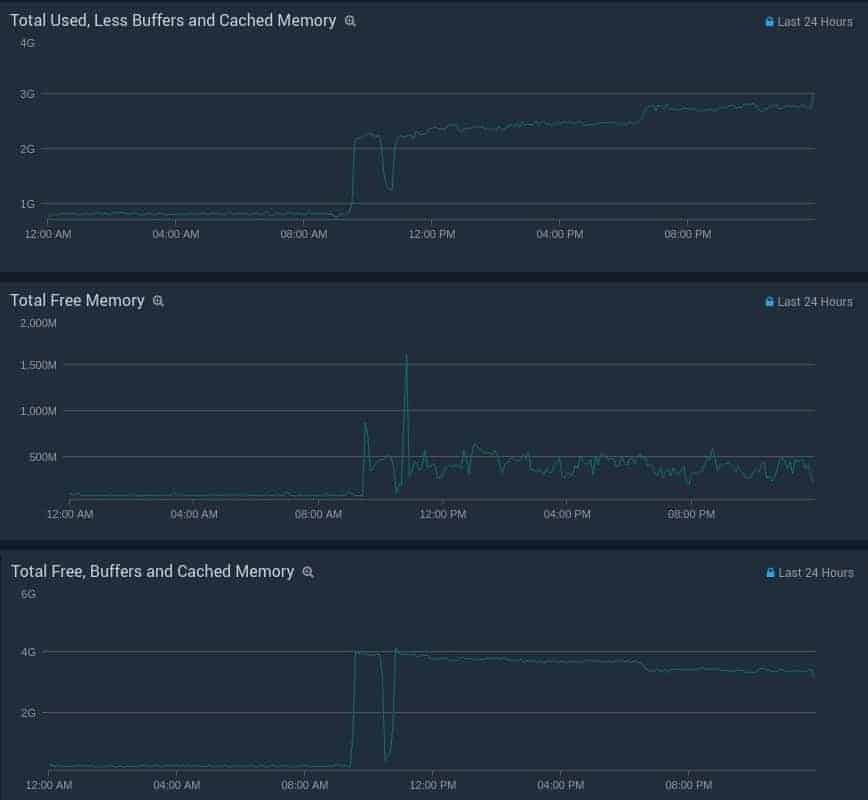 Checking if your Linux server needs a memory upgrade

Has your Linux server been acting slower than usual lately? Or maybe you’ve noticed higher CPU usage with the same traffic levels? Sometimes server performance can change overnight. This could be due to many reasons, such as increased web traffic, change to your database size/queries, and your application or network, to name a few. To check the current state of your Linux server’s memory usage, you’ll want to use one or more of the following command line tools: free, top, vmstat and sar.

The free command displays the total amount of free and used physical and swap memory in the system, as well as the buffers used by the kernel. It’s a more user-friendly method of reading the output of cat /proc/meminfo.

The free command, although simple, used to be one of the most misinterpreted Linux command line tools. However, as of Kernels 3.14 (and emulated on kernels 2.6.27+), the Linux free command made a few changes. Some of which helped admins realize they have a lot less free or available memory than they thought. Many blog posts, QAs, articles and server monitoring tools advise that your Linux server’s Free Memory = Free + Buffers + Cached = WRONG!

Using: free -m (-m = display the amount of memory in megabytes). The screenshot below is from the same 1GB memory Stacklinux VPS from the screenshots above. Here’s a breakdown of what’s being reported:

Notice the extra buffers/cache line. To see this buffers/cache split in the latest 3.14+ Kernel versions of free, use the ‘-w’ option. For example: free -mw, -hw, -w, etc. When you type cat /proc/meminfo the first three lines are: MemTotal, MemFree and MemAvailable. That third line (MemAvailable) isn’t listed on older Linux installs.

So how much free memory do I have?

You will always have some free memory on Linux. Even with constant swap I/O, you’ll notice some free, buffered and cached memory. The Linux Kernel will use swap space (if swap is enabled) to maximize the amount of free or available memory as much as possible. As per the screenshot above, there are over 300MB of ‘buff/cache’ and 61MB marked as ‘free’. But over 1.5GB of swap. If you do not have a swap enabled on your server, you’ll notice poor performance, a low ratio of buffers/cache, system freezes or worst. On a server with swap space, the best indicator that memory is low will be a high frequency of swap I/O. In this case, there’s 1GB of RAM but 1.5GB of swap and kswap (kernel service which manages swapping) is using most of the CPU time.

Bonus: Check out the command: slabtop

In the video above, I’ve used top to look at memory plus swap usage. Notice kswap and the ‘wa’ spike together. These spikes also show clearly that the web server’s performance is being directly hampered because of kswap swapping to disk. As mentioned, kswap is a process used by Linux to manage swap on the system, while ‘wa’ is I/O wait or time that the processor/processors are waiting during which there are outstanding I/O requests. Let’s look at this more closely using vmstat and sar. Unlike the free and top commands, the remaining tools are consistently documented online.

vmstat reports information about processes, memory, paging, block IO, traps, and CPU activity. Let’s use vmstat 1 as per the above screenshot. Notice the si (swap in), so (swap out) and wa (wait) columns. Swap I/O is not always bad; opportunistic swapping can help with performance. However, a high frequency of swap i/o appears on almost every line (every second). Here’s what the same command looks like on a healthy server.

As pictured in the screenshot, you can see even with 1.3G of free RAM, the server also has 246M of used swap. This is from opportunistic swapping. Or swap performed during idle moments that do not negatively impact the server’s performance. Usually, this 246M is data that has not been used for a long time. Continue reading for how you can increase the overall cache that the Linux server holds onto without increasing the frequency and size of swap cache.

With sar, you can collect, report or save system activity information. Like vmstat, sar also can be used for a lot more than checking memory and swap. The above screenshot is also from the same 1GB VPS we started with.

Compare these results with the sar -r results on a healthy Linux server:

Another method of squeezing the most from your server memory is to tune the system’s swappiness (tendency to swap) and cache pressure (tendency to reclaim cache).

swappiness – This control is used to define how aggressively the kernel will swap memory pages. Higher values will increase aggressiveness; lower values decrease the amount of swap. (default = 60, recommended values between 1 and 60) Remove your swap for 0 value, but usually not recommended in most cases.

vfs_cache_pressure – Controls the tendency of the kernel to reclaim the memory, which is used for caching of directory and inode objects. (default = 100, recommend value 50 to 200) )

To edit, you can add or replace these lines in /etc/sysctl.conf file. For example, if you have low memory until you upgrade, you can try something such as:

This will increase the cache pressure, which may seem somewhat counterproductive since caching is good for performance. However, swapping also reduces your server’s overall performance significantly more. So not keeping as much cache in memory will help reduce swap/swapcache activity. Also, with vm.swappiness set to 10 or as low as 1, it will reduce disk swapping.

This will decrease the cache pressure. Since caching is good for performance, we want to keep cache in memory longer. Since the cache will grow larger, we still want to reduce swapping so that it does not cause increased swap I/O.

To check current values using these commands use:

Here’s cat /proc/meminfo output of both servers side by side: 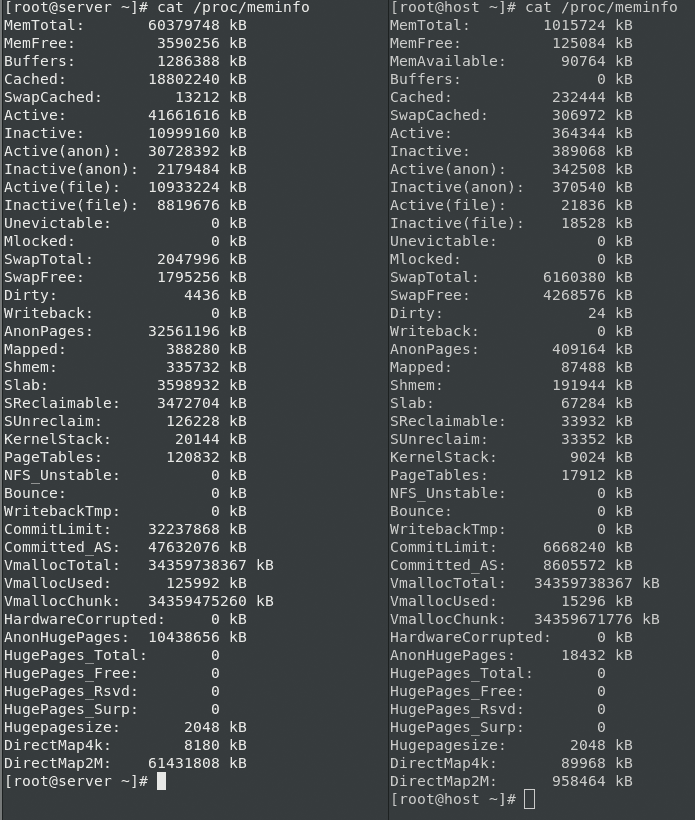 Notice the healthy server on the left; the ‘SwapCached’ is low even with a low vm.vfs_cache_pressure setting of 50.

Update: Here are some screenshots of the server @ 6GB RAM, then 1GB and then finally back to 6GB: 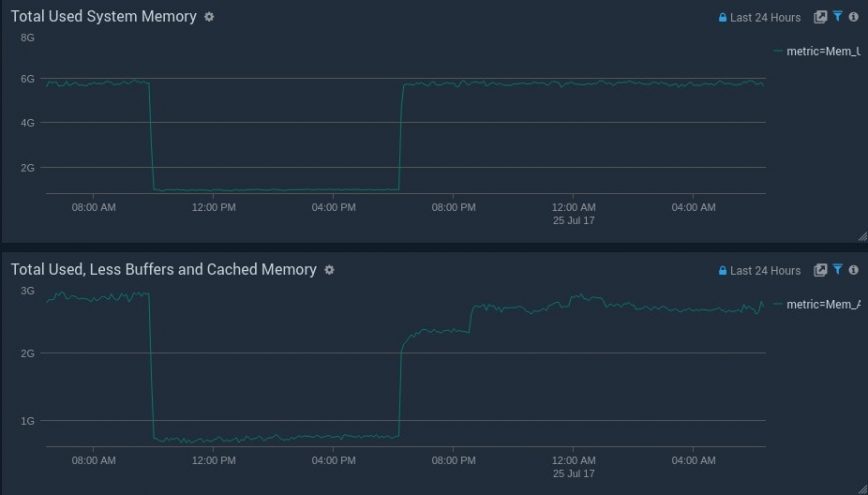 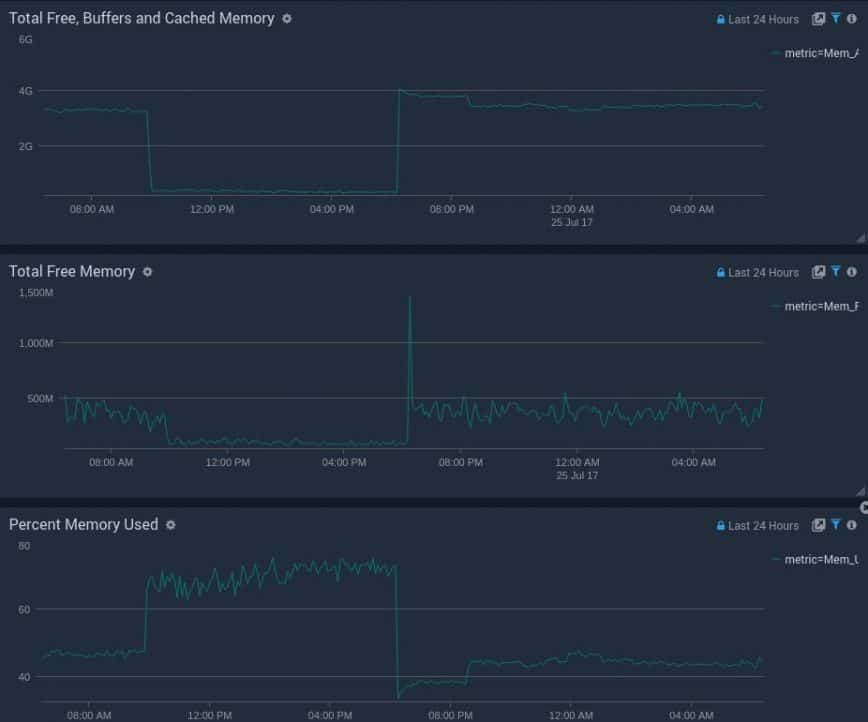 And finally, the outputs of post-upgrade free and top:

Kernel buffer on VMs – Notice on the VPS the kernel buffer is zero. This usually should not be the case. VirtIO is being used as the storage BUS driver/interface and a lot of the disk cache handling is handed off to the KVM hypervisor. The buffers are for disk operations. So we’ll see that number increase when the disk write cache needs to be written out. You can see the I/O on a StackLinux VPS is quite fast (Also see: Your Web Host Doesn’t Want You To Read This: Benchmark Your VPS) 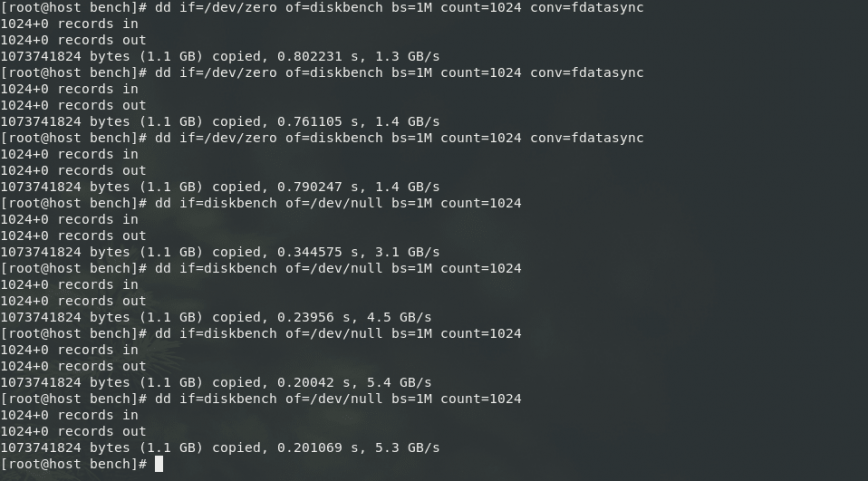