CentOS is run by volunteers who work directly with Red Hat’s RPM source files and pushing them to CentOS for release. At times the project will fall behind in it’s releases vs Red Hat’s current release. This is where CentOS Continuous Release (CR) comes in. CR addresses the need for timely updates. It delivers bug fixes and security updates before an ISO image of the latest point release is ready. So for example, as of this writing, the current release of CentOS is 7.3 (Based on RHEL 7.3), however lets say you need a version of software which includes a security path, bug fix or feature that’s already in RHEL 7.4. Then you can use the CR repo to pull those updates. 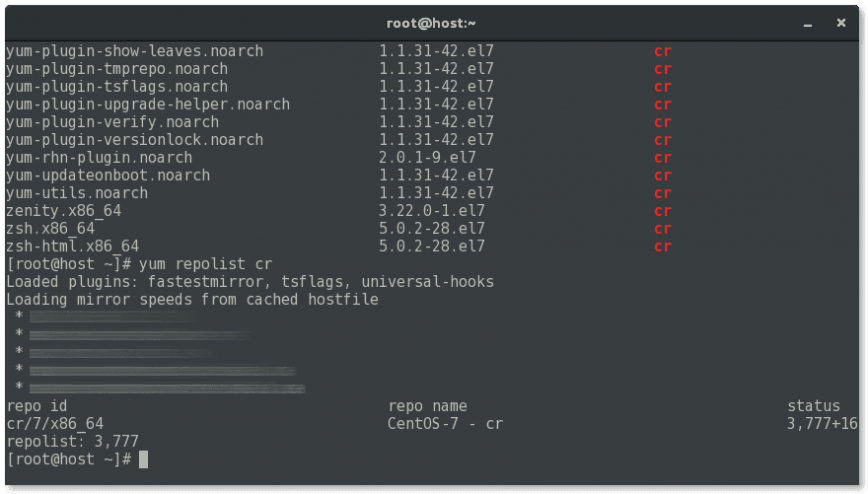 If you haven’t already, confirm what version CentOS you are running with:

This will return current release:

For CentOS 5 and 6 you can install the CR repository by running:

The package is included in the CentOS Extras repository, enabled by default.

Then, to enable the CR repository run:

You can verify that the CR repo is enabled by running:

You should now see the CR repository in the repository list. If blank, then CR was not enabled. For example:

Then to enable the CR repository run:

Now you are ready to use CR repo.  You can update all using:

or, lets say you just want to maintain only specific package(s). Then edit the file /etc/yum.repos.d/CentOS-CR.repo and add the following line at the end:

or to include all packages of that type:

Using includepkgs can create issues with package dependencies, so make sure to test and adjust where needed to meet your needs. If you prefer to exclude certain packages then use exclude instead: